Studies of Corruption in Sweden

According to virtually all international corruption rankings, Sweden is one of the top performing countries with very few exposed incidents of corruption. But does this automatically imply that it can be declared a perfectly ‘healthy patient’? By extensively reviewing existing research and adding empirical sets of data, the authors of A Clean House? shed light on shady corners of the Swedish case.

What do we know about corruption in Sweden, and what can be said of such affairs over time? Four scholars of political science and economics describe how countries typically viewed as low-corruption states can have particular problems that should not be underestimated nor neglected. This is the first comprehensive study in English of corruption in a low-corruption, mature welfare state.

By revealing causes, scope and consequences of the corruption in low-corruption countries, the authors point out shortcomings in the international evaluations of corruption, and suggest constructive reforms that might curb the types of corruption occurring in ”healthy” societies.

Mats Sjölin is Professor in political science at Linnaeus University. He has led research projects on political ethics and party government. His research has been published in journals such as Government & Opposition, Local Government Studies, Scandinavian Political Studies, and in several books. Webbsida: https://lnu.se/personal/mats.sjolin/

Richard Öhrvall is a PhD candidate in political science at Linköping University and researcher at the Research Institute of Industrial Economics. His research has been published in journals such as Acta Politica, Electoral Studies, Local Government Studies, and in several books. Webbsida: http://richardohrvall.com/ 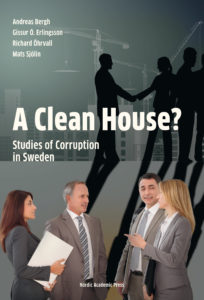